Riding safe at night with the taillights, headlights and sidelights on the Hiboy scooter

Buying a seat for your Hiboy S2 PRO, you could make the ride perfectly comfortable. The electric scooter with seat will free you from tiredness caused by commuting or traveling.

I've had the scooter for nearly 8 months and so far I've had a great time. Initially, I was surprised as to how rough the ride was while going over rough terrain. I think that's 100% due to the solid tires. I tried to search up how to switch to air tires but I had no luck. I really hope Hiboy adds air tires to the accessories shop. I know solid tires are great for the city because you won't get flats but again, the ride can be really rough at times.

Just like any other scooter, I had to adjust the breaks, handles, etc. to feel more comfortable but those adjustments were very easy.

The breaks are very strong. I mostly use the electric break because it stops WAY smoother but the manual break comes in handy when I'm in a difficult situation, especially in the unpredictability of the city. The scooter is very responsive.

I went out a lot during the middle of the winter and I noticed that the electric brake switch sometimes freezes in the down position and when I press down on the throttle I was confused why my scooter wasn't going forward. Thankfully it's not stuck so it went back from lifting the switch back up and it was fine again for a while until it freezes back in place again. Just to clarify, this happens when it's around 20 degrees or lower. This has NOT happened in warmer weather. I don't think this is a reason not to get the scooter because it's a minor inconvenience. Most people shouldn't use the scooter at that temperature because it is really bad for the battery.

The suspension is not great. I barely ever feel it and even when I put a lot of weight on it, it barely budges. If there was front suspension then it would feel much better.

The app is decent. I don't use it very often but I like the abundance of options.

The LED on the bottom is always red but I wish we could control it to be any color or cycle colors.

(In the photo I accidentally rode over wet concrete so there's literal concrete on the wheels lol. I'm quite short so the scooter looks larger than it is. I think the scooter is a decent size for anyone 5'3 and above but probably fine for 5ft people too)

Overall, I really like this scooter and I would buy it again. I just wish they allowed people to choose air tires. 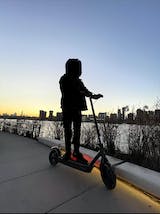 A
Alexis Davis
Fun & Safe for all

My husband and I have tried various types of electric scooters. From Hoover 1 Alpha Pro, to Dynamo, to The Eagle, to The Aviator, to The nine Bot Segway, and finally the Quingor. But nothing compares to The HiBoy S2 Pro.
It is absolutely the best electric scooter out on the market. It’s great for thin lighter people to big heavy people. It’s fast and safe. We love the HiBoy so much that we purchased four more so everyone in the family has one and we love to go on long scooter rides when the weather permits. The battery last long. It’s great and safe way to spend time with the family and our neighbors as because of us they have also decided to purchase HiBoy scooters.

I received my Hiboy on time and I had the best experience. I had a lot of fun. I got more that what I expected. Great safety features.