Please note that rules and regulations for riding electric scooters on public roads differ for every country. Current UK law states that electric scooters are not to be used on footpaths, cycle lanes or roads.

Question: Can I change the speed to mph?
Answer: It will show MPH on phone app as your riding with correct settings . Shows MPH only on phone app not Hiboy.

Question: What is the warranty with this product?
Answer: We offer a one-year warranty.

Question: How many years does battery last long before replacing the new one?
Answer: It depends. Normally it would be approx. 2 years.

Question: Can I use it on a raining day?
Answer: We don't recommend to use in raining day.

Question: How do I pair the Bluetooth? No instructions came on the package.
Answer: Please download Hiboy APP in Apple Store or Google Play, and then open the Bluetooth function of the phone, open Hiboy APP, the application will automatically scan Hiboy Scooter nearby. Simply click to pair.

Question: Is there a software update/hack that is known to increase speed? With a 350W motor it should be able to hit 35k/h or 21mph.
Answer: The products are set and limited at max 19MPH. And we don't recommend to increase speed beyond 19MPH.

Question: What battery capacity do you set on the app?
Answer: 7.8 AH. Also, we recommend to turn Cruise Control on, and choose Sport Mode to save power.

Question: What is the weight capacity for riders?
Answer: It is max. 260 lbs, however the travel range will be decreased with 220+ lbs weight.

Riding safe at night with the taillights, headlights and sidelights on the Hiboy scooter.

Buy a seat for your Hiboy S2 - you could make the ride perfectly comfortable. The electric scooter with seat will free you from tiredness caused by commuting or traveling.

Purchasing scooter has been life changing.
The suspension provides a very comfortable ride. Dual motor system offers ample speed and power even up steep inclines. Range is also another selling point.
The extra cost for this scooter is well worth the spend.

The scooter is incredibly well-built I cannot begin to describe how solid the construction feels. the scooter quickly accelerates to its top speed in a smooth fashion versus some of the rental scooters that start out slowly and then serge up to speed. It has many nice features such as the headlight, deck lights and brake lights. The disc brake stops the scooter safely and securely. I'm pretty much a tech geek and I bought this just to have fun on and occasionally right to the gym. It is a blast to ride; I'm 5 foot 11 and weigh about 175 lb and the scooter will very easily do 14 1/2 miles an hour. 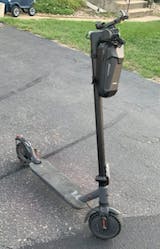 I received my first electric scooter weeks ago and I can't get enough of it. I became intrigued with electric scooters while attending a conference in Atlanta, where I decided to try the Bird and Lime scooters. I had an absolute blast, so I decided to get one by hiboy, and I found this Hiboy scooter, which looks almost same with Bird’s, and the price’s very competitive.
Since I got it, I've had a lot of fun using it riding back and forth to work. I think It’s even better than Bird and Lime’s, which’s I didn’t expect. The scooter has been very user friendly and given me no issues thus far.
I will update, if needed, but it has been a great purchase.

Just have it for the past few days. Already using it back and forth from office and home, about 2 miles each way on mostly flat surface, such as sidewalk and pedestrian crossing on intersections, etc.
I wear a helmet and everyone using these scooters should as well.
I really love it.

Your cart is currently empty.

is added to your shopping cart.

You have successfully subscribed!
This email has been registered
Close