Foldable and portable for adult daily use. Fast speed and long-range for commuting or city adventuring. WARNING: USE ONLY THE ORIGINAL CHARGER

Question: Can I change the speed to mph?
Answer: It will show MPH on phone app as your riding with correct settings . Shows MPH only on phone app not Hiboy.

Question: What is the warranty with this product?
Answer: We offer a one-year warranty.

Question: How many years does battery last long before replacing the new one?
Answer: It depends. Normally it would be approx. 2 years.

Question: Can I use it on a raining day?
Answer: We don't recommend to use in raining day.

Question: How do I pair the Bluetooth? No instructions came on the package.
Answer: Please download Hiboy APP in Apple Store or Google Play, and then open the Bluetooth function of the phone, open Hiboy APP, the application will automatically scan Hiboy Scooter nearby. Simply click to pair.

Question: Is there a software update/hack that is known to increase speed? With a 350W motor it should be able to hit 35k/h or 21mph.
Answer: The products are set and limited at max 19MPH. And we don't recommend to increase speed beyond 19MPH.

Question: What battery capacity do you set on the app?
Answer: 7.8 AH. Also, we recommend to turn Cruise Control on, and choose Sport Mode to save power.

Question: What is the weight capacity for riders?
Answer: It is max. 260 lbs, however the travel range will be decreased with 220+ lbs weight. Riding safe at night with the taillights, headlights and sidelights on the Hiboy scooter. Buy a seat for your Hiboy S2 - you could make the ride perfectly comfortable. The electric scooter with seat will free you from tiredness caused by commuting or traveling.

It is too early to tell if there will be any issues in the future in regards to the scooter, but so far it has been a good experience during my commute to work; so far have ridden to work and back about 7-8 times (~50-60 miles).

Update on 10/10/2020:
Hiboy support contacted me and offered S2Pro for the same price as S2, so I accepted because I couldn't find any better escoote
rs than Hiboy's in the market.
As I recall my old S2, I think it was the first lot because some parts were obviously retrofitted and some screws were stripped already.
Now, I got a new S2Pro, and I see it is firmly assembled; the rear fender brackets are properly attached, and steel bars which hold dual rear suspensions seem to be longer now.
Hiboy is really serious about customer support, so you could be satisfied with Hiboy's products in this price range.

Eventually, my S2 was broken because of the frag rear chassis after I rode 40 days, so I got almost full refund by Amazon.

First week of my ride, bolts which hold rear parts and tires started loosen and rear fender started making noises, so I needed extra works to install extra washers to hold rear fender's bar and tires by my self, which was fine and understandable for me.

Hiboy support was helpfull and tried to replace with new S2, but I just returned it bacause the same problem might happen if I keep riding on NYC bumpy streets.

I saw the same issues happening in the reviews, so I think Hiboy needs to work more on the durability of rear parts of chassisfor next generation of S2.

Again, I really liked S2, but it was not durable enough in NYC.
S2 gotta be tough in NYC as us.

The scooter is incredibly well-built I cannot begin to describe how solid the construction feels. the scooter quickly accelerates to its top speed in a smooth fashion versus some of the rental scooters that start out slowly and then serge up to speed. It has many nice features such as the headlight, deck lights and brake lights. The disc brake stops the scooter safely and securely. I'm pretty much a tech geek and I bought this just to have fun on and occasionally right to the gym. It is a blast to ride; I'm 5 foot 11 and weigh about 175 lb and the scooter will very easily do 14 1/2 miles an hour.There are a few recommendations that I would make if you buy one: as others have stated the brake lever and bell are at a very awkward angle - go ahead and make that adjustment before you mount the handlebar to the scooter. I made the mistake of trying to do it after and ended up stripping out the Allen screw. Two trips to Lowe's and about $25 to buy a stripped screw remover and replacement screws and I had fixed the problem. I would also recommend turning off cruise control until you are very, very comfortable riding the scooter - you can tap the brakes to disengage but, it is a bit awkward until you get the hang of it. My only real complaint with the scooter iis - I do not know that I trust the charger - it seems to be generic at best and at worst a fire hazard - it does not have the larger pin and normal pin holes that you would find on most UL compliant chargers. So.. Im not going to leave it charging when I am away.

I havent had an opportunity to deplete the batteries as of yet but, I will give an update when I do, just to give everyone a real world idea of its range.

All in all - it seems to be an exceptionally well built scooter at a steal of a price.

Edit - I'm increasing the overall rating to 5 stars as the company provided the UL Certification and refunded my expenditures for the stripped screw. Very responsive customer service FYI. As I have had more time to ride - I would estimate the real world range of the scooter to be around 8-10 miles at top speeds.

J
James
Great scooter to get it

If you are looking for a E scooter for a short commute to work and not in a hurry. this a very good scooter. I recently just purchased this scooter and I like it because it look like the Mi 365 and have the less worry that the Mi 365 has. For like the tires, it already come solid so you don't have have to worry about the flat tires and all the headache of changing it. Second for the neck folding mechanism is solid and steady. And the light is very bright. I use this scooter for short commute to work at night and it fine on the eco mode. I did this for a few day already. The battery last me about a good 5 day on a 1 mile around trip to and from work, a total of 8.5 miles of usage. it still has about 58% left of the battery. And the reading on the app is pretty accurate. But there is one down side to it. I used the scooter on a Sport to ride it to my best by park. Around trip is about 5 miles total, I was on the sport mode the whole. It run great the whole time until I almost got when the scooter lost it power, like it when into a eco mode. So I check the scooter app it read 68 Celsius. Will that concern me. I will let cool down and see what happen. Also I'll be contacting the seller about it too. The seller is very wonderful, great response. Also some of the parts quality feel cheap but hey they got to make some money too. I understand, as long as it function right it fine with me. Of course there will be some imperfection of it . Like I have one of my neck screw doesn't go all the way through. For it price it pretty good when I got it. It was at $459 I got with the seat. The Mi was at $399 at the time. So why not $50 more it already come upgraded from all the worry stuff of the Mi has. Over all, I'm pretty happy with this scooter. Because it ready to go and worry free. 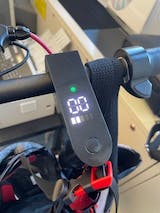 I loved it bought here for my dad. He loves traveling everywhere with it. It folds so its easy to travel with. And comes with a seat which is awesome. I cannot find a similar product as amazing as this. I would also say their customer service is amazing. I had lost my charger and within a week or two they replaced it. My dad has now had this for about 6 months give or take and he has no complaints. Im just writing a review so that people who are skeptical know that this is an amazing product.

Your cart is currently empty.

is added to your shopping cart.

You have successfully subscribed!
This email has been registered
Close